Paddington 2 is Coming Out on Blu-ray Combo Pack, DVD and Digital! 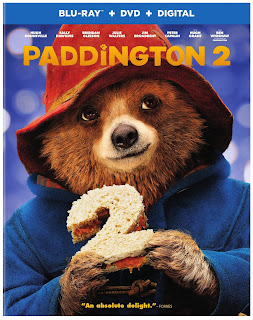 REUNITE WITH YOUR FAVORITE BEAR WHEN
PADDINGTON 2
ARRIVES ONTO BLU-RAY™ COMBO PACK,
DVD AND DIGITAL FROM WARNER BROS. HOME ENTERTAINMENT

Following the worldwide hit “Paddington,” one of the most successful family films of all time, this much-anticipated sequel finds Paddington (Ben Whishaw) happily settled with the Brown family in London, where he has become a popular member of the local community, spreading joy and marmalade wherever he goes.

Paddington’s return to the big screen was again helmed by BAFTA-nominated director Paul King (“Paddington,” “Come Fly with Me,” “The Mighty Boosh”) from a script written by King and Simon Farnaby (Sky TV’s “Yonderland,” “Mindhorn”), based on the best-selling and internationally adored books by Michael Bond, creator of Paddington Bear.

While searching for the perfect present for his beloved Aunt Lucy’s hundredth birthday, Paddington sees a unique pop-up book in Mr. Gruber’s antique shop, and embarks upon a series of odd jobs to buy it. Hilarity and adventure ensue when the book is stolen and Paddington and the Browns must unmask the thief.

Stay tuned for a review from us soon!