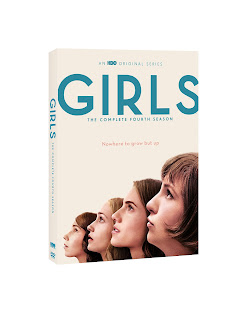 Just in time to catch up before Season 5, Emmy nominee and Golden Globe winner Lena Dunham returns for the fourth season of the Emmy®- and Golden Globe-winning comedy series Girls. Starring and created by Dunham and executive produced by Judd Apatow and Jenni Konner, the series follows the misadventures of a group of twenty-something friends in and out of NYC. Girls: The Complete Fourth Season will be available on Blu-ray ($34.98) and DVD ($26.95) February 16, 2016. The Blu-ray set features a free Digital HD copy of all 10 episodes, plus exclusive bonus content including gag reels, deleted scenes, music features and more.

This season finds the girls tentatively edging towards maturity as they take on new personas in new worlds. As the season begins, Hannah (Dunham) leaves New York to attend the prestigious Iowa Writers' Workshop in the hopes of becoming a more serious writer, while confronting uncertainty in her relationship with Adam (Adam Driver). Meanwhile, back in New York, Marnie (Allison Williams) pursues a music career while balancing her professional and romantic relationship with Desi (Ebon Moss-Bachrach); Shoshanna (Zosia Mamet) graduates and begins interviewing for jobs, while sorting out her relationship with Ray (Alex Karpovsky); and Jessa (Jemima Kirke) is trying out sobriety through AA, though her ability to stir up drama remains undiminished.

Blu-ray with Digital HD Features (along with all DVD extras):

Are you looking for a good chick flick? If so,I have just the one! Girls The Complete Fourth Season is the one for you! Filled with some romance,comedy and some twists this one will keep you watching and wanting more!

By turns hilarious and heartbreaking, this season's 10 episodes offer up some unexpected twists, as the girls of Girls continue to hunt for success – creatively, professionally and romantically – in New York City and beyond.

This is a great series for all ages~as I enjoyed it and so did my teenage granddaughter!

{I was sent the Girls-The Complete Fourth Season to review. No monies were offered or accepted. All above opinions are my own.}