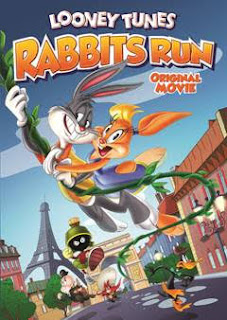 What happens when Bugs Bunny becomes embroiled in a scheme surrounding the invention of a highly-sought after invisibility spray? The result is a mad-cap adventure set in New York City and Paris titled Looney Tunes Rabbits Run. This brand-new, original animated film was just released by Warner Bros. Home Entertainment (WBHE) Aug 4!!

In Looney Tunes Rabbits Run, Bugs Bunny is a New York City cabbie who picks up the beautiful but bumbling perfume salesgirl, Lola Bunny, after she’s lost her job at a department store. Bugs, who drives Lola home from work in his taxi, has no idea he’s about to embark on the longest ride of his life! 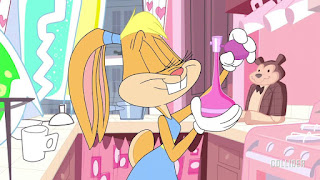 In her spare time, Lola is an amateur perfume maker who’s convinced one day she’ll concoct the world’s most beautiful fragrance and sell it to the House of Moufette in Paris. Unbeknownst to Bugs, Lola, in one of her attempts to create the next big fragrance, has inadvertently invented an invisibility spray, and now the whole world is on their tails to steal her precious concoction!

On the run to Paris, Bugs and Lola must outsmart everyone from government officials, to Lola’s greedy department store boss, Giovanni and even Yosemite Sam, all of whom are after Lola’s “scent-sational” invisibility spray. Will Bugs help Lola thwart the bad guys and help her realize her dream of launching her own signature fragrance line? It’s a heart-stopping, looney adventure that animation fans won’t want to miss! Joining Bugs and Lola is a lineup of favorite Looney Tunes characters including Speedy Gonzalez, Elmer Fudd, Daffy Duck, Pepe Le Pew, Foghorn Leghorn and many others.

“Bugs Bunny is an enduring character with timeless appeal, who is loved by generations of fans. Looney Tunes is a powerful brand among consumers and it’s one of our most important franchises. We’re excited to offer this wonderful new film,” said Mary Ellen Thomas, Vice President Family & Animation Marketing. She added, “Looney Tunes Rabbits Run is a clever, entertaining new story that’s perfect for family viewing.”

I don't know about you~But the Looney Tunes has always been a favorite of mine. So~when this DVD was released I could not wait to watch it with the grandchildren. This starts out with a adventure and keeps on through out the movie. It keeps you laughing and all of your favorites are in here too. The graphics are so good in this,one of my favorite  animation films!


{I was sent a Looney Tunes Rabbits Run DVD to review. No monies were offered or accepted. All above opinions are my own.}