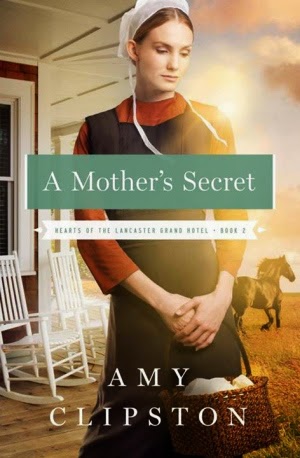 ~A Mother's Secret~
Book two in the Hearts of the Lancaster Grand Hotel series.
Carolyn Lapp dreams of marrying for love. But will the errors of her past destroy this dream forever?
Carolyn Lapp longs to have a traditional Amish family. But she lives on her brother's farm with her parents and her 15-year old son, Benjamin. Carolyn has never revealed the identity of Benjamin's father and lives daily with the guilt and shame of her youthful indiscretion. Her brother simply will not forgive her.
His answer is to arrange a practical marriage for Carolyn to Saul, a widower with a little girl. But Carolyn isn't convinced that Saul really loves her and believes he is simply looking for someone to help raise his daughter.
When Benjamin causes trouble at a local horse auction, horse breeder Joshua Glick decides that he must be taught a lesson. Carolyn and Joshua are unmistakably drawn to each other, but Joshua mistakenly assumes that Benjamin is Carolyn's brother. Carolyn fears that if he discovers the truth, her past will destroy their budding romance.
After years of shame and loneliness, Carolyn suddenly has two men vying for her attention. But which of them will give her the family-and the unconditional love-she's longed for?

My Review~
I have been always fascinated by the Amish,as there is just something about them that draws me in with their books. This time,it was a whole new story for me with the Amish as it is not something that you hear about in the community,a single mother.Carolyn made a mistake 15 years ago,and she is thinking that maybe love and marriage is not in her future. Her brother is one of the people that will not let her live down her mistake and wants her to marry Saul,but she is not ready to settle. It was a fast read and really drew me in!

Amy Clipston holds a degree in communication from Virginia Wesleyan College and works full-time for the City of Charlotte, NC. Amy lives in North Carolina with her husband, and two sons and four spoiled rotten cats.

Don't miss the newest offering in the Hearts of the Lancaster Grand Hotel series from Amy Clipston, A Mother's Secret. An unwed Amish woman yearns for real love and a family. The only thing in her way is the shame she’s been carrying for half of her life. The novel received 4-1/2 stars from Romantic Times and was chosen as a Top Pick.

See what others are saying on the Blog Tour Here

Amy is celebrating with a Kindle Fire giveaway.

One winner will receive:


Enter today by clicking one of the icons below. But hurry, the giveaway ends on July 6th. Winner will be announced July 7th on Amy's blog.

Don't miss a moment of the fun; enter today and be sure to stop by Amy's blog on July 7th to see if you won.