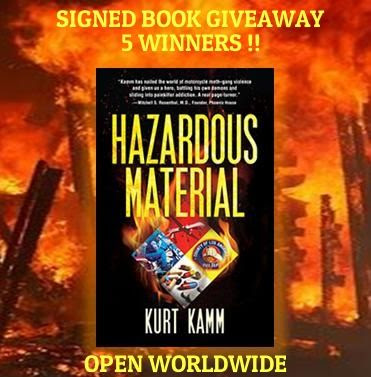 This fantastic giveaway has been brought to you by
author Kurt Kamm and Beck Valley Books
Open Worldwide
Ending on Sunday 7 July at 11.59pm EST

Bucky Dawson is a HazMat specialist with Los Angeles County Fire Department HazMat Task Force 103. His station is in Lancaster, CA--an area populated with meth labs and outlaw motorcycle gangs, as well as Edwards AFB, NASA, and top-secret aerospace facilities.
Bucky--divorced and lonely--struggles with painkiller addiction. One night Task Force 103 is toned out to support a Sheriff's raid on a meth lab. Bucky thinks he sees his sister at the door of a double- wide trailer in the Mojave Desert just before it explodes.

Bucky's life is in chaos. While he searches for answers to his sister's death, he is drawn into a conflict with the Vagos, who are selling drugs in the Mojave Desert. After a confrontation in which the Vagos nearly kill him, Bucky exacts an unusual revenge that only a HazMat firefighter could accomplish.

The novel twists and turns, bringing together firefighters, a sinister aerospace engineer, the Vagos -- led by the Dwarf, their seven foot tall Sergeant at Arms, and the Los Angeles County Sheriff's Department in a surprise ending you will not anticipate but you will certainly enjoy.

Enter Below and Good Luck !!