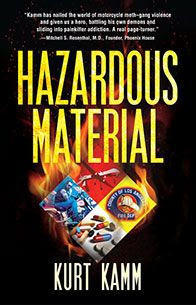 Bucky--divorced and lonely--struggles with painkiller addiction. One night Task Force 103 is toned out to support a Sheriff's raid on a meth lab. Bucky thinks he sees his sister at the door of a double- wide trailer in the Mojave Desert just before it explodes.

Bucky's life is in chaos. While he searches for answers to his sister's death, he is drawn into a conflict with the Vagos, who are selling drugs in the Mojave Desert. After a confrontation in which the Vagos nearly kill him, Bucky exacts an unusual revenge that only a HazMat firefighter could accomplish.

The novel twists and turns, bringing together firefighters, a sinister aerospace engineer, the Vagos -- led by the Dwarf, their seven foot tall Sergeant at Arms, and the Los Angeles County Sheriff's Department in a surprise ending you will not anticipate but you will certainly enjoy.

This book started with suspense,and went from there! It took you into the life of Bucky,and what he went through looking for his answers about his sister and her past. It was if I was with him when he went into the bars with the Vagos's. How he got his pills to stop the pain,and it almost cost him everything or did it?!? From the time that I started this book,I couldn't wait to see what was going to happen next. It kept me at the edge of my seat at many times.

Buy the Book from...
Amazon.co.uk
Amazon.com
Barnes and Noble

One of the Malibu fires, the 60 mile-per-hour Santa Ana wind-driven Canyon Fire, burned to his front door and destroyed the homes of several neighbors. Kamm said the lessons he learned from the County Fire Department while writing his books helped him save his home.


Kurt Kamm has built an avid fan base among first responders. Each of his firefighter mysteries features a firefighter in a particular discipline (wildland, arson investigation, paramedic, hazardous material response, and search and rescue).  His first novel, One Foot in the Black (2008) has become a favorite of firefighters.  Subsequent novels, Red Flag Warning: A Serial Arson Mystery (Aberdeen Bay, 2010) and Code Blood (MCM Publishing, 2012) have won numerous fiction awards (see attached summary). Kamm’s latest book, Hazardous Material, has just been released.  He is currently attending search & rescue training and working on his fifth novel.

Find the author on


{I received this book to review through Beck Valley Books Book Tours, all the opinions above are 100% my own.}