We love to watch DVD's here~I have quite the collection. But we are always on the lookout for new ones to watch. Thanks to Phase 4 Films we were able to review some great DVD's that the whole family enjoyed! 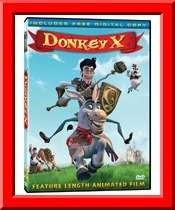 ~Donkey X~
Follow Rucio, the most adventurous, brave, and mischievous donkey of Castile as he tells the true story of the legendary Don Quixote. Rucio jumps at the opportunity to join Don Quixote on his quest to battle The Half Moon Knight and overcome the dangerous obstacles that lurks them on the way.
My grandson really liked this one~as he loved the donkey! He thought that it was so funny that the donkey wanted to be a horse. I liked the animation but the storyline was a little hard to follow to me. The grand-kids didn't seem to mind though~as they sat and watched the whole movie. 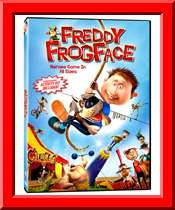 ~Freddy Frogface~
Being small doesn´t make life easy for little ten-year-old Victor and his friends, who not only have to face a world full of stern grown-ups but also the town bully Freddy Frogface. When a circus comes to the sleepy little town, Victor is thrilled at having the chance to perform in a talent show with his dog Sausage. Yet Freddy soon comes up with a sinister plot of his own to spoil Victor´s plans...
This was such a cute story.I liked that as the kids were watching this,they were also learning about bullying. The graphics in this DVD were awesome,and it really kept the kids attention. When Freddy Frogface swallowed a frog-they laughed and laughed. They couldn't believe that he did that.
I would say that both of these movies are great for all~young and old to enjoy.
{I was sent the DVD's to review from Phase 4 Films. No monies were offered or accepted. All above opinions are my own.}