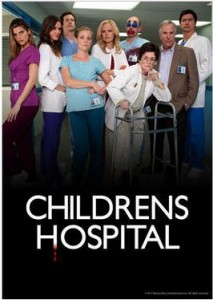 Have you had the chance to catch Childrens Hospital yet?
If not you are missing out,as this is one of the best adult comedies that I have watched.Not only it is good humor~but you will know many of the people in this one. I was so surprised when I saw Henry Winkler as I loved him as The Fonz!

The courageous doctors and staff of Childrens Hospital – brilliant, egotistical, nymphomaniacal – do whatever it takes to save sick kids’ lives whether they deserve it or not. The team will disrobe, do Ecstasy, donate organs (except for the important ones), or shoot adult films in the operating room – all for the greater good. Show creator Rob Corddry stars with series regulars Malin Akerman, Lake Bell, Erinn Hayes, Rob Huebel, Ken Marino, Megan Mullally and Henry Winkler, and a slew of celebrity drop-ins. Get your hands on all 14 Season Three episodes of this totally twisted, medically dope series that’ll literally get you high. Not really.

Childrens Hospital: The Complete Third Season on... by thewbdotcom

At Childrens Hospital, doctors obviously don’t work on Saturdays! As you can imagine, this can leave the doctors and patients alike in some pretty sticky situations.

Working as a bartender and manager for many years~I have heard many excuses in my life for not wanting to come to work. From having overslept to my grandmother died{for the 5th time}. But the best one that I heard is when I was working in my parents bar and one of the workers called in because she said that she was out the night before and drank so much that there was no way she could come on and serve alcohol. As it would just make her sick all over again! OK~Now I think that I have heard everything..LOL


What is the most hilarious excuse you’ve given or heard as to why a particular job could not be completed. Who were you trying to convince? Did it work?I'd love to hear about them!

{"I have been hired by Warner Bros WBWord division to raise awareness for 'Childrens Hospital."}