Smallville-The Complete 10th Season What Are Your Favorites? 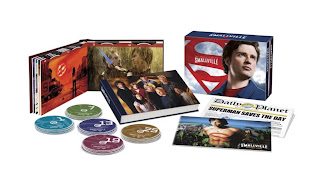 ~Smallville-The Complete 10th Season & The Complete Series~
The series that redefines the origins of the world's greatest hero reaches its powerful conclusion with more revelations, more fascinating characters from DC Comics and a mind-blowing, spirit-lifting finale that is everything fans could want!
Having been a fan for a long time some of my favorites from Season 10 are~
When Lois and Clark walk down the aisle side by side. It was so romantic as they were showing everyone that they were a team already. And the Sara Bareilles song Breathe Again makes it all that more special. I shed a few tears~which I am sure that I am not the only one.
Or how about when Supergirl returns to earth? How shocked were you? I was just surprised knowing Jor-El sent her as he didn't think Clark could handle it!
What are some of your favorites?
The "Smallville- The Complete Series" has all 218 episodes with over 28 hours of special features, never-before-seen features and production art and an Exclusive Daily Planet newspaper written by DC Comics!
You can Pre-order  Smallville: The Complete Tenth Season DVD here.
{"I have been hired by Warner Bros WBWord division to raise awareness for 'Smallville.'"}