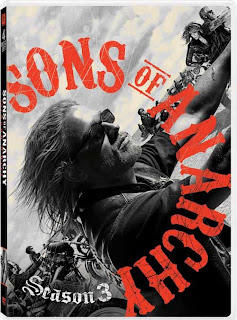 Starring Charlie Hunnam, Ron Perlman and 2011 Golden Globe® Award-winner Katey Sagal, “Sons of Anarchy” Season Three is FX’s adrenalized drama about a notorious outlaw motorcycle club intent on protecting their sheltered small town against encroaching drug dealers, corporate developers and overzealous law officers.  The club is equally determined to protect their ruthless and illegally thriving arms business.
Hunnam stars as Jackson ‘Jax’ Teller, a man whose love for the brotherhood is tested by his growing apprehension for its lawlessness.  Katey Sagal stars as Gemma Teller Morrow, Jax’s force-of-nature mother, who along with Ron Perlman as Clarence ‘Clay’ Morrow, Jax’s stepfather and MC president, have their own darker vision for the club.
Chaos and confusion reign after Jax’s infant son is kidnapped and Gemma is framed for murder.  When Abel’s trail leads SAMCRO to Belfast, Ireland, secrets are revealed and the bonds of brotherhood are shattered. Jax is left reeling with more questions than answers as he struggles with the legacy of his father, the future of the club, and the fate of his family.
I have been watching this show since day one. As Katy Sagal is one of my favorites and she doesn't disappoint in this one either. Of course all the actors are good~as there is a lots of great acting in this show. I like that it takes you right with on everything. It is a show that you start watching and don't want to stop.As there is action,drama and good humor. The DVD set is complete with all 13 episodes and includes special features such as all-new scenes shot exclusively for the Blu-ray and DVD that bridge season 3 to season 4, extended creator’s cut episodes,deleted and extended scenes, commentaries, a table read with the cast, and a custom bike build.


Drawing an average of 7.6 million total viewers per week on a multi-run cume, "Sons of Anarchy" retained 97% of its Season 2 average, and is the highest-rated series ever on FX.
{I was sent this DVD to review~No monies were offered or accepted.}