September 26, 2011
THE REAL CRIME IS NOT COMMITTING
TO YOUR DREAMS 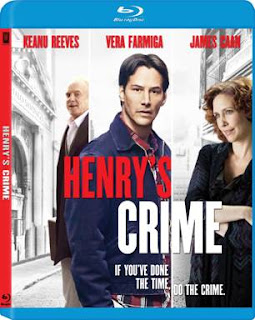 He’s done the time, now he might as well do the crime.
Acclaimed indie filmmaker Malcolm Venville (44 Inch Chest) directs an all-star cast in the outrageous crime caper HENRY’S CRIME, just released  to Blu-ray and DVD on recently from Twentieth Century Fox Home Entertainment.
With a terrific cast led by Keanu Reeves (The Matrix Trilogy), Vera Farmiga (Up in the Air) and a splendid James Caan (Misery), HENRY’S CRIME is a fun comedy with irresistible heist and heart” (Boxoffice Magazine). Reeves stars as Henry Torne, a wrongly accused man who winds up behind bars for a bank robbery he didn’t commit. After befriending a charismatic lifer (Caan) in prison, Henry finds his purpose – having done the time, he decides he may as well do the crime. But his outlandish plan to rob the very same bank spins wildly out of control, as he finds himself performing in a stage play and falling in love with the production’s seductive leading lady (Farmiga).
This is a great movie~that kept my interest. As who doesn't love Keanu Reeves and James Caan? They were great in this movie~made me laugh and laugh..Keanu Reeves stars as Henry, a simple man who lives a quite life with his wife. After a friend has him driving the get-away car in a bank robbery, Henry is sent to prison. There he meets Max (James Caan) who convinces Henry that if he is "doing the time, he should do the crime".
One year later Henry is a free man with an audacious plan. Since he's already on record as a convicted bank robber, Henry figures he may as well try his hand at the criminal lifestyle. After stumbling across an old underground bootlegger tunnel that connects the bank to an adjacent theater, Henry convinces Max to apply for parole in order to help him execute the perfect robbery. Posing as an actor, Henry lands the lead role in the theater's production of Chekhov's The Cherry Orchard, and begins working with Max to burrow their way into the nearby bank vault. But now the more time Henry spends in the theater, the harder he finds himself falling for his capricious co-star Julie (Farmiga), a development that could very well land them all in jail before the final curtain.
{I was sent this DVD to review~No monies were offered or accepted.}