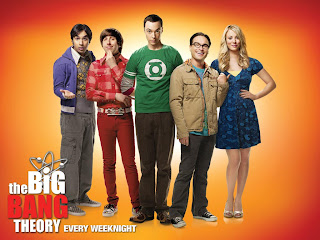 “The Middle Earth Paradigm” from Season 1 of The Big Bang Theory aired Monday 9/26. In the episode, the gang attends a costume party in Penny’s apartment.
Penny dresses as a cat, Sheldon dresses as the doppler effect, Leonard is Frodo from Lord of the Rings, Howard is Robin Hood but gets mistaken for Peter Pan and Raj is Thor, the Norse god of thunder. Each costume is interesting for each character {Raj, the quietest of the group, is the god of thunder}. 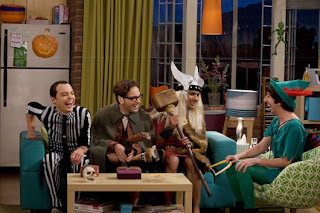 I have to admit that I think that Howard as Robin Hood was the best costume. As he just looked so cute~and everyone mistaking him for Peter Pan was cracking me up.Because if you really look at him that is who he looks like.Not that the rest of them weren't funny. As they all looked great.Penny looked really cute in her Cat costume~she out shined all the rest there. 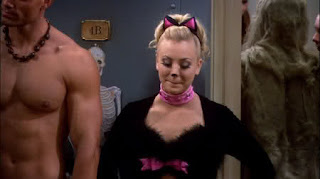 This is one of my favorite shows and I really enjoy watching all of the episodes on TV. The Big Bang Theory is now on 5 Nights a week~so you can watch your favorites too! Just go to www.bigbangweeknights.com to check your local listings.
{“I have been hired by Warner Bros. WBWord division to promote The Big Bang Theory in Syndication."}