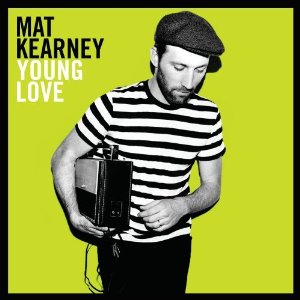 ~Young Love~
This is Mat Kearney's third album~it hit stores August 2nd 2011, debuting on the #1 spot on iTunes. The first song on the album is his hit single "Hey Mama" check out his video. This song describes the first meeting between Mat and his new wife, after courting her for a few months he stole her heart.
Mat Kearney is an O2O favorite and some of you may have been lucky enough to catch his super fun performance at BlissDom'11 where he did a surprised duet with Michelle Branch.
I love music~I have it on all the time. That CD was a nice surprise as when I put it in I immediately tapping my feet and enjoying the music. Mat covers it all~from hip-hop, adult alternative, and classic storytelling it is on this CD.It just makes you feel happy when you are listening to it.
If you aren’t familiar with Mat’s music you’ve probably heard some of his previous hits on your favorite TV shows.  Past songs have appeared on 30 Rock, Grey’s Anatomy, The Hills, Friday Night Lights, Scrubs, NCIS, and numerous other television shows.   Mat's been winning over crowds on tours with everyone from John Mayer and Sheryl Crow to Keane and The Fray.
Young Love Tracklisting
1 Hey Mama
2 Ships In The Night
3 Count On Me
4 Sooner Or Later
5 Chasing The Light
6 Learning To Love Again
7 Down
8 She Got The Honey
9 Young Dumb And In Love
10 Rochester
11 Seventeen
Mat is hitting the road in September playing nearly 40 shows in US and Canada.
You can also find Mat on Facebook and Twitter
{I received a free copy of the CD from One2One Network to for this review. I am now entered to win a gift card.}