Supernatural: The Anime Series on DVD/Blu-Ray!

After being separated for years, the Winchester brothers come together and surmount enormous obstacles (including some pretty gnarly demons) in search of their father. Throughout the show, family and brotherhood specifically is a very important theme. In fact, it is often the key element that saves each brother’s life when things get the most dangerous. 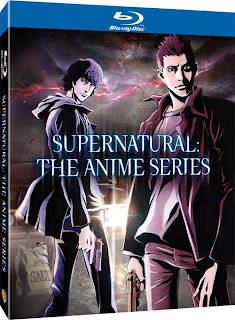 I only have one sister but we were very close growing up.As my parents bought a bar and we worked there with them and also did everything together with our kids for almost 15 years. Even though we now live far apart~I still would do anything in the world for her. As we lost both of our parents so it is just her and I am we need to take care of each other! As I love her with all my heart and more...
How about you?  Do you have a brother or sister that you would stand alongside and fight demons? How has family been there for you in moments of crisis? I'd love to hear a little of your story too!
You can  pre-order your copy of Supernatural: The Anime Series on DVD or Blu-Ray today! As it will be released on 7/26.
{I have been hired by Warner Bros. WBWord division to promote Supernatural: The Anime Series on DVD/Blu-Ray.}