The Smurfs A Magical Smurf Adventure Review and Giveaway 8/5 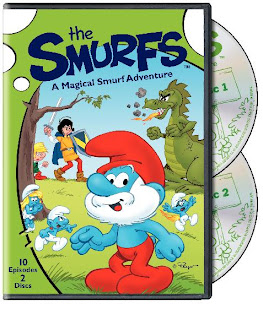 Get your Smurf on with Warner Home Video’s release of~

~The Smurfs A Magical Smurf Adventure~

In a hidden village dwells a clan of magical creatures, living in mushroom houses and taking showers with dewdrops. They’re those international celebrities known far and wide as the Smurfs — and they’re back on DVD. This itty-bitty powder-blue crew, including Brainy, Lazy, Vanity and Smurfette, is led by the wise, gentle and 542-year-old Papa Smurf. Gargamel, the local evil wizard, is forever scheming against the tiny team but our little friends outsmurf him every time! The Smurfs may only be three apples high, but they left miles of smiles on the faces of Saturday morning cartoon fans.  Smurf it up again with this colorful collection of superior Smurftainment!. 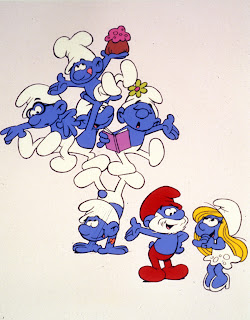 Who doesn't remember the Smurfs? As they were the hottest thing around for many years.
Hanna Barbera, produced the animated series of "The Smurfs" and the popularity of these cute little guys just soared. The animated series ran from 1981 through to 1990, on NBC in America, and won many awards and was watched and loved by millions.
This DVD brought back so many memories..
My kids loved to get up in the morning and watch The Smurfs when they were young. I remember that each one liked a different Smurf and when we went to the store we would have to look for that certain one for each kid. They also had sheet sets~I remember telling my grandchildren that the other day and they sure laughed..As thinking about your parents having something you like now is kinda funny isn't it?!? LOL
We love this DVD. As the weather has been too hot to go outside so we watched it the other day.As soon as I started the Smurfs my granddaughter did not move! She sat and watched it and just laughed and laughed. I know that this will be enjoyed by the other grandchildren too when they come over.
10 “Smurftastic” Featured Episodes Include~

Smurf Van Winkle – Lazy is tricked into believing he’s slept his life away.
Revenge of the Smurfs – The Smurfs try to get even with an army that’s stormed their village.
Magic Fountain – The Smurfs search for a magic fountain.
Smurf Me No Flowers – Lazy is led to believe he has only a few days to live.
The Cursed Country – An evil master captures Smurfs to work in his diamond mine.
The Blue Plague – Brainy gives the Smurfs a meal that makes them feel like chickens.
The Ring of Castellac – The Smurfs return a drugged duke to his rightful place.
A Mere Truffle – Tracker loses his memory while leading the Smurfs on a truffle hunt.
Gormandizing Greedy – Greedy gains weight after a diet of sweets and desserts.
Sister Smurf – Smurfette and a young girl are held captive by an old hag.
~Giveaway~
*Enter To Win*
One Reader Will Win
The Smurfs A Magical Smurf Adventure DVD for their own!
Please enter below to win~

{Disclosure~I received The Smurfs A Magical Smurf Adventure to Review free.No monetary compensation has been offered or accepted.The opinions above are my own}