July 27, 2011
Celebrate the 100th Birthday of the queen of comedy with the Warner Archive!
WarnerArchive.com is thrilled to announce the DVD release of The Lucille Ball RKO Comedy Collection: Vol. 1 in honor of Lucy’s  100th Birthday: http://bit.ly/WAC_Lucy 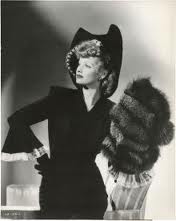 Long before she was crowned the queen of TV, Lucille Ball reigned as the "Queen of the Bs" for RKO Pictures, appearing in over 43 films in under a decade. Although she had yet to find her niche, Lucy's prodigious talents, grace and charm as a performer found her much in demand across a wide variety of movies. This collection brings together three rarely seen cinematic treasures from Lucy's RKO days, giving modern audiences a chance to witness a star on the rise. 3 Films on 2 DVDs. 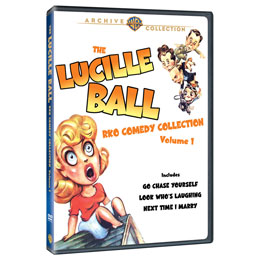 ~The Lucille Ball RKO Comedy Collection Vol. 1~
This DVD is set to be released on Aug 2nd and you can be one of the first see it!
Films Included:
Go Chase Yourself~ (1938) Before she hitched her hilarious antics to Vincente Minnelli's The Long, Long Trailer, Lucy joined Joe Penner and a slightly shorter trailer in this madcap romp. After bank robbers use her husband's camper to cover their getaway, Carol Meeley (Ball) sets out to prove her hubby is far too dumb to commit a crime.
Next Time I Marry~ (1938) Lucy moves up to leading lady in this screwball comedy, served up with inspired humor by Garson Kanin in one of his earliest directorial efforts. In order to claim her inheritance, heiress Nancy Crocker Fleming (Ball) must marry a "plain American Joe." So she does what any self-respecting debutante would do ­ she hires a husband.
Look Who's Laughing~ (1941) An alluring and glamorous Lucy enjoys top billing in this feature length satire based on the long running Fibber McGee and Molly radio series. Joining Lucy and the McGees (Jim and Marion Jordan) in this rollicking satire are Edgar Bergen & Charlie McCarthy, who see Fibber try to persuade an aircraft company to set up shop in the small town of Wistful Vista. James V. Kern, who would later direct I Love Lucy, pens the tale, while screen pioneer Allan Dwan directs.
~Giveaway~
*Enter To Win*
One Reader Will Win
The Lucille Ball RKO Comedy Collection Vol. 1 DVD for their own!
Please enter below to win~