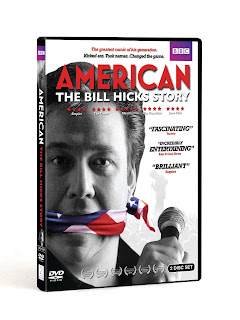 American: The Bill Hicks Story~
Brings to life the amazing true story of one of modern culture’s most iconic figures. Much more than just a comedian, Bill Hicks has become an inspiration to millions around the world. As a rebellious teenager, he discovered that comedy was a way to break all the rules, but then he found it could also open people’s minds. Bill’s comedy challenged the injustices of life head on, but his uncompromising approach met with conflict in America and it was instead on the international stage where he found fame. In 1993, on the verge of wider success, Bill fell ill with terminal cancer, but his timeless material has lived on, revered by comedians and audiences alike as the man who changed comedy forever. Taking documentary to a new level, American uses interviews, archive footage including many unseen performances, and stunning animation to bring Bill’s inspiring story to life, told for the first time by those that knew him best.
This documentary was great.It was narrated through interviews of the ten people who knew him best.So even if you don't know who Bill Hicks is~you will after watching this!
Bill Hicks was born in Valdosta, Georgia on December 16th, 1961. He was raised in the Southern Baptist faith. Bill idolized Johnny Carson and Woody Allen as a child. Because of this, he took an early interest in stand-up comedy. That lead to Hicks emulating those comedians. After watching their son's growing interest in comedy, his parents took him to a psychoanalyst at the age of 17. The therapist joked that his parents would benefit more from the psychotherapy than Hicks.
Stand-up comedian Bill Hicks performed the final show of his career at Caroline's in New York on January 6, 1994. He moved back to his parents' house in Little Rock, Arkansas, shortly thereafter. He died of cancer in the presence of his parents at 11:20 p.m. on February 26, 1994. He was 32 years old. Stand-up comedian Bill Hicks was buried in the family plot in Leakesville, Mississippi.
On February 7, 1994, Hicks authored a verse on his perspective, wishes and thanks of his life, to be released after his death~
“I left in love, in laughter, and in truth and wherever truth, love and laughter abide, I am there in spirit.”
Available on DVD/Blu-ray from WB
Official Site ~ www.bbcamericashop.com
{I was sent American~The Bill Hicks Story DVD to review~All opinions are my own.No monies were offered or exchanged}