"Childrens Hospital: The Complete First & Second Seasons"
On Sale Now!
The staff of Childrens Hospital is dedicated, relentless and committed to everything but treating patients. The series began on the web on TheWB.com with ten episodes, roughly five minutes in length, all of which premiered on December 8, 2008.Adult Swim picked up the rights to the show in 2009 and began airing episodes in 2010. No medical condition is too severe to distract these oblivious physicians from their primal need to flirt, gossip, make out, talk about sex, show their underwear and more. 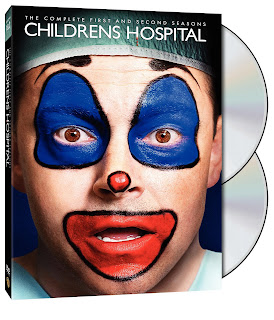 In one of the Hospital moments~
Dr. Owen Maestro’s ex~girlfriend lied by telling him she had a tumor just to break up with him. Now~something tells me that she really wanted to get away from him! As I know I have head some lame excuses in my day~but that sure is a good one..
I have put together a list of excuses I have heard for break ups~
"I'm confused.  I don't feel the same way about you the way you feel about me.  Do you think we can still be friends?"
I'm being sent out of the country on a top secret mission and I will not be able to contact you for 5 years.
You're too nice. I don't deserve someone who's nice.
You mean more to me than life itself -- but I'm suicidal.
What is the craziest excuse you have used or heard to break up with someone?!? I'd love to hear them!!
{"I have been hired by Warner Bros. WBWord division to promote Childrens Hospital Season 1&2 on DVD. You can purchase a copy here Now!}