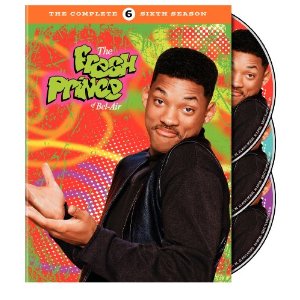 I was so excited to receive the Fresh Prince Of Bel Air DVD's to review. As no matter who you are you have to remember Will Smith in this show. I loved this show~and still like to watch the reruns as there are shown here late at nite. I still laugh when Will and Carlton get into their little disagreements.As it seems that no matter how much Carlton tries~he never is as cool as Will. This is a great set to watch over and over again~as it is good humor.Something that the whole family can enjoy!
It’s a rap: the final season! The Fresh Prince’s reign is over. Will Smith and the rest of the hilarious cast take their final bows with all 24 Season 6 Episodes on 3 Discs. A lot’s happened since Will’s life got flipped, turned upside down and he showed up at the Banks’s Bel-Air doorstep. And the final season keeps the fun rollin’ to the very end with hip comedy style, phat one-liners, a not-to-be-missed blooper episode, and guest stars that include William Shatner, B.B. King, Dick Clark, Richard Roundtree, Wayne Newton and – in a standout turn – Chris Rock as an on-the-rise comic and his butt-ugly sister. Any guess who ends up as Will’s date for a night for dancin’ and (ugh) romancin’? You go, Will! 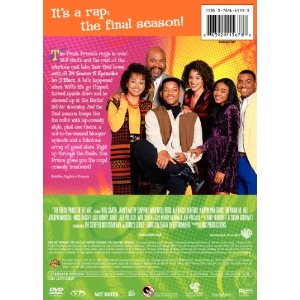 This 3-disc set includes all 24 episodes from the sixth, and final, season of the show.
You can purchase the DVD from the WB Shop here
{I was sent Fresh Prince of Bel-Air  DVD to review~All opinions are my own.No monies were offered or exchanged}