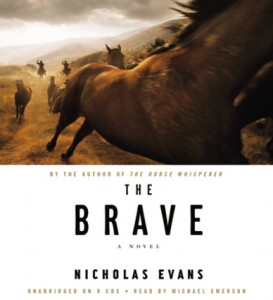 Tom Bedford is living alone in the isolated wilds of Montana. Having distanced himself from his own troubled past, he rarely sees his ex-wife, and his son, Danny, is away in Iraq and hasn't spoken to him for years. Tom hasn't always been so removed from society. As a boy, his mother was a meteoric rising star in the glitzy, enchanted world of 1960s Hollywood. There, she fell in love with the suave Ray Montane, who played young Tom's courageous onscreen hero, Red McGraw, the fastest draw around. Tommy and his mother lived in a glamorous, Hollywood version of the Wild West. Everything was perfect, until the gold flaking on their magical life began to chip away, revealing an uglier truth beneath. Ray was not who he seemed. Tommy and his mother fell into a deadly confrontation with him, and they fled Hollywood forever, into the wilderness of the real West.

As a man, Tom has put all of that behind him--or so he thinks. Unexpectedly, his ex-wife calls, frantic: Danny has been charged with murder. In the chaos of war, his son has been caught in a violent skirmish gone bloodily awry. The Army needs someone to pay for the mistake. Tom, forced into action, is now suddenly alive again and fighting to save the son he'd let slip away. To succeed, he must confront the violence in his own past, and he finds that these two selves--the past and the present--which he'd fought so long to keep separate, are inextricably connected. As father and son struggle to understand one another, both are compelled to learn the true meaning of bravery.

Beautifully interlacing the past and present, the author of The Horse Whisperer reminds us that we are tied to the glories and mistakes of our own history. The Brave lives up to its name, as one the most courageous and full-hearted novels of our time.
About The Author~

Nicholas Evans was born and grew up in Worcestershire, England. He studied law at Oxford University, graduating with first class honors, then worked as a journalist for three years on the Evening Chronicle in Newcastle-upon-Tyne. He then moved into television, producing films about US politics and the Middle-East for a weekly current affairs programme called Weekend World. It was during this time that he traveled a lot and got to know the United States.
In 1982 he started to produce arts documentaries – about famous writers, painters and film-makers, several of which won international awards (films about David Hockney, Francis Bacon, Patricia Highsmith). In 1983 he made a film about the great British director David Lean (Lawrence of Arabia, Doctor Zhivago, etc). Lean became a friend and mentor and encouraged Evans to switch from fact to fiction.
For the next ten years, Evans wrote and produced a number of films for television and the cinema. In 1993 he met a blacksmith in the far South-West of England who told him about horse whisperers – people who have the gift of healing traumatized horses. Evans started work on what was to be his first novel.
Published in the fall of 1995, The Horse Whisperer has now sold about fifteen million copies across the world. It has been the number one bestseller in about 20 countries and has been translated into 36 languages. It was also made into a movie, starring, produced and directed by Robert Redford.
I loved this AudioBook! It was such action filled story that I couldn't wait for then next chapter to began.The voice is very soothing and I am sure that all of will enjoy it too.At times I felt that I was there with Tom as he really gets does take you away..You feel his pain and also his love in each word.
Thanks to Anna at Hachette  2 Winners Will Win The Brave  AuidoBook!
~To Enter~
Go To Hachette Book Group and Tell Me Another Title That Sounds Good!
{This must be done for all entries to count}
~Extra Entries~
Please make sure that you leave a way for me to contact you.Thanks! *This giveaway is open to USA  and Canada!*
{No PO Boxes}
Winner will be selected at random and will be contacted via e-mail. If I do not receive a response from the winner within 48 hours I will chose a new winner.
Winners will be subject to the one copy per household rule, {which means that if they win the same title in two or more contests, they will receive only one book in the mail. }
This contest ends on Jan 1st at 11:59 PM CENTRAL TIME

{Disclosure~I received The Brave AudioBook to Review free.No monetary compensation has been offered or accepted.The opinions above are my own}