Oogy The Dog Only a Family Could Love 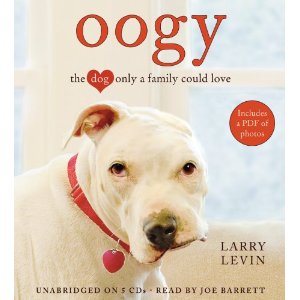 In the bestselling tradition of Rescuing Sprite comes the story of a puppy brought back from the brink of death, and the family he adopted.
In 2002, Larry Levin and his twin sons, Dan and Noah, took their terminally ill cat to the Ardmore Animal Hospital outside Philadelphia to have the beloved pet put to sleep. What would begin as a terrible day suddenly got brighter as the ugliest dog they had ever seen–one who was missing an ear and had half his face covered in scar tissue–ran up to them and captured their hearts. The dog had been used as bait for fighting dogs when he was just a few months old. He had been thrown in a cage and left to die until the police rescued him and the staff at Ardmore Animal Hospital saved his life. The Levins, whose sons are themselves adopted, were unable to resist Oogy’s charms, and decided to take him home.
Heartwarming and redemptive, OOGY is the story of the people who were determined to rescue this dog against all odds, and of the family who took him home, named him “Oogy” (an affectionate derivative of ugly), and made him one of their own.

My Review~This audiobook was great from start to finish! I listened to it for a couple days and it made me laugh and cry at many times. It tells of everything that he had to overcome before he could find a family that would love him just for HIM! I love animals so I was really excited to review this.But I do think that if you are not a animal lover now~Oogy just might change your mind!

Larry Levin and his family live in a suburb of Philadelphia, PA. He is an attorney in solo practice. He and his wife, Jennifer, have been married for twenty-six years. Their sons, Noah and Dan, are eighteen. Oogy is eight.

Thanks to Anna at Hachette  3 Winners Will Win Oogy AuidoBook!
~To Enter~
Go To Hachette Book Group and Tell Me Another Title That Sounds Good!
{This must be done for all entries to count}
~Extra Entries~
Please make sure that you leave a way for me to contact you.Thanks!

*This giveaway is open to USA  and Canada!*
{No PO Boxes}
Winner will be selected at random and will be contacted via e-mail. If I do not receive a response from the winner within 48 hours I will chose a new winner.
Winners will be subject to the one copy per household rule, {which means that if they win the same title in two or more contests, they will receive only one book in the mail. }
This contest ends on Dec 5th at 11:59 PM CENTRAL TIME

{Disclosure~I received the Oogy AudioBook Review free.No monetary compensation has been offered or accepted.The opinions above are my own}