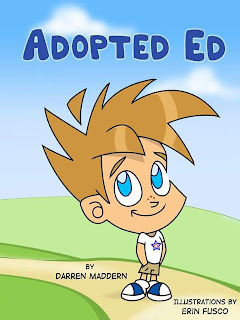 November is National Adoption Month and This is A Great Book To Review!
Along with the month long celebration. A very special Adoption Day~November 20, 2010,marked the 11th National Adoption Day. It's a special day because thousands of adoptions are finalized in court rooms all across the United States.
This simple and beautifully illustrated story is about an adopted little boy and his journey through his early years. Sensitive and likable, little Eddie is just like every other kid, eating ice cream and playing ball. At school when he is teased by bullies about being adopted, his mom coaches him through the situation, which ultimately sets the course of his life with personal empowerment. Over time, Eddie feels a strong "void" and becomes curious about his biological parents, which ultimately leads him to find out more. ADOPTED ED concludes with a section of famous people who were adopted.
This is such a cute little book as not only  does it teach children about adoption but it also has beautiful illustrations in it! It tells everyone that it is OK to be different as no child should be teased. It shows that each child is special no matter who you are. I think that my grandchildren would love to read this book even though they are not adopted they can still learn from Adopted Ed!
About The Author~
Darren Maddern is just one of the many millions of adopted people throughout the world today.
Born in England, Darren was adopted when he was only 10 days old by Don and Dolly Maddern, an American military couple who were stationed at an American Air Force base just outside of Oxford.
You can purchase Adopted Ed right here at Amazon
{I received Adopted Ed Book from One2One Network. I received no monetary compensation. All opinions expressed are my own}

April 30, 2013
Throughout 2013, My Gym locations across North America will celebrate thirty years of providing fitness and fun to families by offering money saving membership and class discounts, conducting a search tocrown My Gym’s Fit & Healthy Family and hosting fun and fitness-filled My Gym 30 th Birthday party/ Open Houses. Offered April 1 through June 30, the My Gym discounts include free membership to families signing on for the first time and 30% off for four weeks of classes at participating locations. Also taking place April 1 through June 30, My Gym’s 30 th anniversary Fit & Healthy Family Contest is a initiative designed to encourage families to demonstrate how they have made fitness a key part of their family’s lifestyle and share their own family fitness tips with families everywhere through the My Gym contest’s social media. www.facebook.com/mygymfun In August, participating My Gym locations throu
25 comments
Read more

March 17, 2013
Easter is early this year,so we decided to dye eggs last night. You know that the Easter Bunny has got to get the baskets ready so we need to help with the coloring.{So~I am told by my grandson} We were super excited as this year we were sent some new PAAS Easter egg dyes to try.       This year, PAAS has seven new egg decorating kits, including Volcano Eggsplosion, a kit that uses melted crayon shavings to provide instant color and Touch of Velvet, a kit that uses double stick adhesives and flocking powder to create fun, fuzzy shapes on your Easter creations! For the brightest, most vivid colors, add one tablet and three tablespoons of Heinz Distilled White Vinegar to a PAAS Color Cup or a one-cup container. Once the tablet has dissolved, add ½ cup water and stir gently.      According to the PAAS  more than 180 million eggs a year are dyed with PAAS dye!   Also, to help keep hard-cooked eggs from cracking, add two tablespoons of Heinz Distilled W
32 comments
Read more

March 27, 2013
The Glow Crazy Doodle Dome Giveaway Winner Is Here!!     Congrats To~   Latanya I have sent a email and you have 48 hours to respond please. Not the winner this time?!? No worries~I have new things all the time so please stop by again!
11 comments
Read more