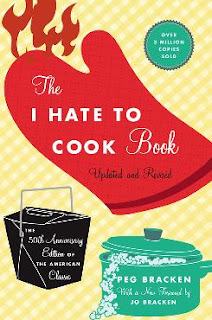 ~I Hate To Cook CookBook~
By~
Peg Bracken
Her writing is clever and witty, downright hilarious at times. Even without considering that it is a cookbook, it makes a great read.
The book has 180 recipes, divided into chapters with headings like "Potluck Suppers, or How to Bring the Water for the Lemonade" and "Desserts, or People are Too Fat Anyway." The first chapter has 30 recipes, one for each day of the month, because Peg noticed that her husband (and the rest of the family) tended to get cranky when they were forced to eat the same thing day in and day out. Some, she says directly, are "pretty dull", but they taste good and they'll get you through the month. Others in the book are more interesting, but they're all quite easy.
"There are two kinds of people in this world: the ones who don't cook out of and have NEVER cooked out of THE I HATE TO COOK BOOK, and the other kind...The I HATE TO COOK people consist mainly of those who find other things more interesting and less fattening, and so they do it as seldom as possible. Today there is an Annual Culinary Olympics, with hundreds of cooks from many countries ardently competing. But we who hate to cook have had our own Olympics for years, seeing who can get out of the kitchen the fastest and stay out the longest."

- Peg Bracken
Philosopher's Chowder. Skinny Meatloaf. Fat Man's Shrimp. Immediate Fudge Cake. These are just a few of the beloved recipes from Peg Bracken's classic I HATE TO COOK BOOK. Written in a time when women were expected to have full, delicious meals on the table for their families every night, Peg Bracken offered women who didn't revel in this obligation an alternative: quick, simple meals that took minimal effort but would still satisfy.
50 years later, times have certainly changed - but the appeal of THE I HATE TO COOK BOOK hasn't.
This book is for everyone, men and women alike, who wants to get from cooking hour to cocktail hour in as little time as possible.

Please make sure that you leave a way for me to contact you if your email is not public in private~Thanks! And Good Luck!!
Winner will be selected at random and will be contacted via e-mail. If I do not receive a response from the winner within 48 hours I will chose a new winner. This contest ends on August 11th at11:59 PM CENTRAL TIME.

*This giveaway is open to USA  and Canada!*


{Disclosure: I received The I Hate To Cook Cookbook to review for free. No monetary compensation has been offered or accepted. The opinions above are my own.}