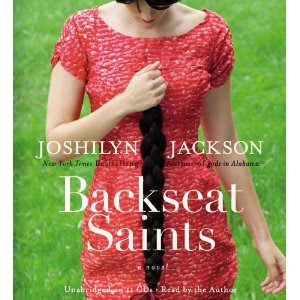 ~Backseat Saints~
By~
Joshilyn Jackson
Rose Mae Lolley is a fierce and dirty girl, long-suppressed under flowery skirts and bow-trimmed ballet flats. As "Mrs. Ro Grandee" she's trapped in a marriage that's thick with love and sick with abuse. Her true self has been bound in the chains of marital bliss in rural Texas, letting "Ro" make eggs, iron shirts, and take her punches. She seems doomed to spend the rest of her life battered outside by her husband and inside by her former self, until fate throws her in the path of an airport gypsy---one who shares her past and knows her future. The tarot cards foretell that Rose's beautiful, abusive husband is going to kill her. Unless she kills him first.
Hot-blooded Rose Mae escapes from under Ro's perky compliance and emerges with a gun and a plan to beat the hand she's been dealt. Following messages that her long-missing mother has left hidden for her in graffiti and behind paintings, Rose and her dog Gretel set out from Amarillo, TX back to her hometown of Fruiton, AL, and then on to California, unearthing a host of family secrets as she goes. Running for her life, she realizes that she must face her past in order to overcome her fate---death by marriage---and become a girl who is strong enough to save herself from the one who loves her best.
BACKSEAT SAINTS will dazzle listeners with a fresh and heartwrenching portrayal of the lengths a mother will go to right the wrongs she's created, and how far a daughter will go to escape the demands of forgiveness. With the seed of a minor character from her popular best-seller, GODS IN ALABAMA, Jackson has built a whole new story full of her trademark sly wit, endearingly off-kilter characters, and utterly riveting plot twists. 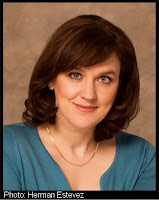 About The Author~
New York Times Bestselling novelist Joshilyn Jackson lives in Georgia with her husband, their two children, and way too many feckless animals. Her debut, gods in Alabama, won SIBA's 2005 Novel of the year Award and was a #1 BookSense pick. Jackson won Georgia Author of the Year for her second novel, Between, Georgia, which also a #1 BookSense pick, making Jackson the first author in BookSense history to receive #1 status in back to back years.
Thanks to Anna Balasi of Hachette Book Group~I am giving away 3 copies of this unabridged audiobook!
~To Enter~
Go To Hachette Book Group and Tell Me Another Title That Sounds Good!
{This must be done for all entries to count}
~Extra Entries~
Please make sure that you leave a way for me to contact you if your email is not public in private~Thanks! And Good Luck!!
Winner will be selected at random and will be contacted via e-mail. If I do not receive a response from the winner within 48 hours I will chose a new winner. This contest ends on July 2nd at11:59 PM CENTRAL TIME.


Thanks everyone and good luck!
*This giveaway is open to USA  and Canada!*


{Disclosure: I received the Backseat Saints  AudioBook to review for free. No monetary compensation has been offered or accepted. The opinions above are my own.}