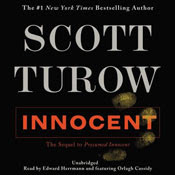 Innocent
Unabridged
By
Scott Turow
Narrated by
Edward Hermann
About The Book~
Innocent  By Scott Turow
The sequel to Presumed Innocent, Innocent continues the story of Rusty Sabich and Tommy Molto. Twenty-one years earlier, Tommy Molto had been a prosecutor during Sabich's dramatic trial, and the two have a history of both mutual respect and antipathy. Each acknowledges the other's courtroom skills, but neither one can forget how Rusty evaded conviction. Now Tommy, who is acting Prosecuting Attorney, tries Rusty for a new murder — that of Rusty's wife, Barbara. Molto's fiery deputy, Jim Brand, is fiercely loyal to his boss and something of a pit bill. He uses all of his powers of persuasion to convince Tommy that this time, they can nail Sabich and make him pay for at least one of his crimes. What follows is a clash of the titans, since Tommy is not the only powerhouse attorney eager to win this case. Rusty is fortunate to have on his side a top-notch defense lawyer, Sandy Stern who, as he did before, hopes to wield his magic wand and exonerate his high-profile client.
About The Author~
In addition to writing cinematic legal thrillers like Presumed Innocent (1987), Reversible Errors (2002), and Limitations (2006), lawyer Scott Turow has also drawn upon his personal and professional experience for thought-provoking nonfiction that includes One L (1977), an account of his freshman year at Harvard Law, and Ultimate Punishment (2003), a reflection on capital punishment. His essays and op-ed pieces have appeared in the Washington Post, The Atlantic, The New Yorker, and other distinguished publications. In 2005, he forayed into historical fiction with Ordinary Heroes, an emotionally resonant novel inspired by his father's experiences in World War II. A practicing attorney with experience in both civil and criminal law, Turow has become involved in extensive pro bono work on death penalty cases.
Thanks to Anna Balasi of Hachette Book Group~I am giving away 3 copies of this unabridged audiobook!
~To Enter~
Go To Hachette Book Group and Tell Me Another Title That Sounds Good!
{This must be done for all entries to count}
~Extra Entries~
Please make sure that you leave a way for me to contact you if your email is not public in private~Thanks! And Good Luck!!
Winner will be selected at random and will be contacted via e-mail. If I do not receive a response from the winner within 48 hours I will chose a new winner. This contest ends on July 13th at11:59 PM CENTRAL TIME.


Thanks everyone and good luck!
*This giveaway is open to USA  and Canada!*


{Disclosure: I received the Innocent  AudioBook to review for free. No monetary compensation has been offered or accepted. The opinions above are my own.}