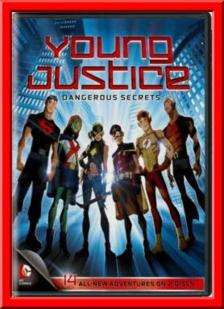 Another round of justice has been served. Watch them battle villains and fight crime in a 2-disc 14 episode collection! Back for another round, Robin, Superboy, Aqualad, Kid Flash, Miss Martian and Artemis join forces to take down some of the universe’s most dangerous foes. From India to Cadmus Labs, these super-powered sidekicks must think fast and use teamwork in their neverending fight against The Light. Join the team as they battle the likes of the ruthless assassin Cheshire, the Lord of Chaos Klarion, the brutally powerful Sportsmaster and the deceptive Parasite. In battles that test their loyal
ties and reveal hidden secrets, Young Justice must use their incredible crime-fighting powers to come together and defeat their toughest enemies yet!

My Review~
My grandson really liked this DVD. Of course~he loves all the DC Comics in general. The animation was awesome,and this is great for all ages as these is not too much violence in it. I was surprised to see all the Super Heroes in this one. He was even surprised that I knew who many of them were. I think that this is a great DVD for all~young and old alike.

{I was sent the Young Justice: Dangerous Secrets DVD to review. No monies were offered or accepted.All above opinions are my own.}

April 30, 2013
Throughout 2013, My Gym locations across North America will celebrate thirty years of providing fitness and fun to families by offering money saving membership and class discounts, conducting a search tocrown My Gym’s Fit & Healthy Family and hosting fun and fitness-filled My Gym 30th Birthday party/ Open Houses. Offered April 1 through June 30, the My Gym discounts include free membership to families signing on for the first time and 30% off for four weeks of classes at participating locations. Also taking place April 1 through June 30, My Gym’s 30th anniversary Fit & Healthy Family Contest is a initiative designed to encourage families to demonstrate how they have made fitness a key part of their family’s lifestyle and share their own family fitness tips with families everywhere through the My Gym contest’s social media. www.facebook.com/mygymfun In August, participating My Gym locations throughout the North America will open their doors for fr…
16 comments
Read more

Available in 3 colors:
Midnight Black Platinum Mocha
US Only
Prizes will be ordered and shipped from keurig.com

Here are the details to sign up:
-Free Link (Twitter or Pinterest)   The first 50 bloggers to sign up will get a link free with announcement.  Announcement is require or you have to pay a waver fee of $5.00 Please get your announcement here. (Please read the sign up form on the top to know if we still have free space available)

-Link/ or extra links $3.00 each (if the free spots are gone, to be part of this giveaway you will need to pay $3.00 for each link you want on the giveaway) Announcement is require or you have to pay a waver fee of $5.00. Please get your announcement here.

September 17, 2012
AFA Mali Futon Giveaway! You can win a Brand New AFA Mali Series Futon! Join me as I am going to be part of this AFA Mali Futon Giveaway Event Hosted By: 3 Princes and a Princess 2. Where AtoZ Stores will be giving away not one, but two AFA Mali Futons!
AFA Mali Futon-The American Furniture Alliance (AFA) Mali Futon has a comfy cushion pillows. This futon is constructed with six - position wings on the frame allowing to convert from a sofa or a multi-position lounger. This is a great peice of modern furniture that is stylish and saves space. Check out all of the different color options to find the futon that is perfect for any living space. $330 Value! - Mali Flex Futon Frame - 6" Futon Mattress - 2 Bolsters & 1 Back Support Pillow - Winner can Choose any Color in the Mali Sofa/Cushion Solid Series Pewter Frame Futons.

This Event is Free to join.

You get one free link for posting. And~Blogger who refers the most sign ups will receive a $100 AtoZ Stores Gift Card!
Ann…
6 comments
Read more