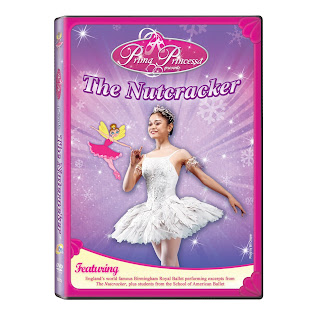 What little girls doesn't want to be a ballerina? I know that when my granddaughter's all get together they play dress up and run around on their tip toes telling me that they are ballerina's! They even have little tutu's that they dress up in. With Christmas right around the corner~It was the Perfect time to receive the Nutcracker DVD.
The producers of the “Prima Princessa” DVD series, Stephanie Troeller and Mary Kate Mellow, are both mothers of dance loving daughters, who were the original source of inspiration for the series. The creative duo is motivated by a deep desire to bring the beauty and wonder of ballet into the lives of young children who otherwise might not have that opportunity.
That is why I was so excited to review Prima Princessa Nutcracker as I knew that my granddaughters would love it! And I was right as when they saw the DVD I couldn't get the wrapper off fast enough. They sat and watched the entire DVD which is 40 minutes. Of course I think that the dance steps that will shown in between might have helped too. I think we all enjoyed the Prima Princessa’s Nutcracker and I know that you and that special little princess in your life will too. And with a price of only $6.99 you can't go wrong.You can purchase at Amazon.
Become a ballerina! Prima Princessa brings you England's world famous Birmingham Royal Ballet performing excerpts from The Nutcracker that will inspire the ballerina in you! Come join in the holiday fun with Prima Princessa as she takes you to a magical show filled with snow fairies, toy soldiers, tutus and pirouette.
{Disclosure~I received the Prima Princessa’s Nutcracker DVD to Review free.No monetary compensation has been offered or accepted.The opinions above are my own.}
PBS & Public Television Stations nationwide this Holiday Season 2010 from Thanksgiving thru New Years Day will be broadcasting "Prima Princessa Presents The Nutcracker," distributed by NETA . You can see a list here to see if there is one by you!

April 30, 2013
Throughout 2013, My Gym locations across North America will celebrate thirty years of providing fitness and fun to families by offering money saving membership and class discounts, conducting a search tocrown My Gym’s Fit & Healthy Family and hosting fun and fitness-filled My Gym 30 th Birthday party/ Open Houses. Offered April 1 through June 30, the My Gym discounts include free membership to families signing on for the first time and 30% off for four weeks of classes at participating locations. Also taking place April 1 through June 30, My Gym’s 30 th anniversary Fit & Healthy Family Contest is a initiative designed to encourage families to demonstrate how they have made fitness a key part of their family’s lifestyle and share their own family fitness tips with families everywhere through the My Gym contest’s social media. www.facebook.com/mygymfun In August, participating My Gym locations throu
24 comments
Read more

March 17, 2013
Easter is early this year,so we decided to dye eggs last night. You know that the Easter Bunny has got to get the baskets ready so we need to help with the coloring.{So~I am told by my grandson} We were super excited as this year we were sent some new PAAS Easter egg dyes to try.       This year, PAAS has seven new egg decorating kits, including Volcano Eggsplosion, a kit that uses melted crayon shavings to provide instant color and Touch of Velvet, a kit that uses double stick adhesives and flocking powder to create fun, fuzzy shapes on your Easter creations! For the brightest, most vivid colors, add one tablet and three tablespoons of Heinz Distilled White Vinegar to a PAAS Color Cup or a one-cup container. Once the tablet has dissolved, add ½ cup water and stir gently.      According to the PAAS  more than 180 million eggs a year are dyed with PAAS dye!   Also, to help keep hard-cooked eggs from cracking, add two tablespoons of Heinz Distilled W
33 comments
Read more

December 05, 2011
I  am happy to be part of the Winner Wonderland Giveaway!! This Winner Wonderland Giveaway is hosted by Put A Little Umbrella In Your Drink , Seeds of Life , And The Little Ones Too and Taking Time For Mommy . This event features giveaways with a value of $25 or more at each of the participating blogs. Check out all of the great Winner Wonderland Sponsors being featured in this event! Be sure to visit each blog from the linky below and enter for your chance to win! Be sure to enter By Dec 4th~Good Luck! My Sponsor is " Merryberry "! Merryberry is  a new jewelry company that everything is handcrafted by Merry and just wait until you see the beautiful pieces that she has created! I was sent a beautiful bracelet and earrings and let me tell you~I was very impressed with Merry's work. Everything is just Perfect~and I couldn't have been more happier!! This is just 3 of them~she has many more too! Just wait until you see everything! And~right now she
21 comments
Read more